A Few Thoughts on the Passing of Keith Johnson

A few thoughts on the passing of Keith Johnson

Keith actually hired me for my very first teaching position. I was fresh out of Cal Arts MFA program and about as green a teacher as you get. Keith was also recently a grad of RISD and we shared an office that was really a closet, so small we had to take to door off to make it work, two desks back to back, in such close quarters you become friends quickly. Back in those pre-digital days of 1977 the debate was not a film/digital one but black and white vs color debate. I was the more experimental color guy, Keith the more traditionally based photographer. In retrospect both debates seem pretty silly today.

The main thing I remember about Keith as an artist and photographer is that he remained intensely curious about the very nature of the medium. At the core of most of his work was an examination of how photography spoke to him and he believed everything you needed to know about the work was imbeded in the work and all you needed to do was to figure it by looking at it and understanding those elements within it. He also believed in the value of just making photographs for the sake of discovery. We often did that together.

Some of my best photo memories were of use just driving around looking for photographs and seeing what showed up. Our mutual friend Bart Parker joined us in a one week photo tour of upstate New York one summer. There could not be three more different photo types at play. Bart took the considered approach, more wandering than anything else. I was the more hyper of the three doing a quick scouting of the location and figuring out pretty quickly if I was interested in any of it and Keith was a more middle ground. Bart often would remark that he was sure there were photographs hovering around here someplace. We all learned a lot from each other that summer. 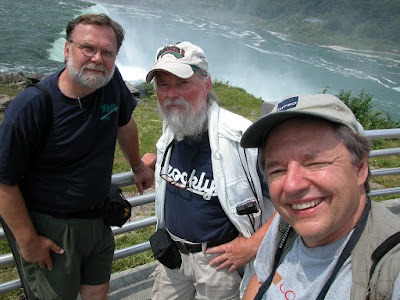 Keith never gave up being an artist. Even after leaving the more traditional academic world for the world of business, working for Sinar, Hasselblad and later in his career Zeiss, he continued to work, exhibit and do some teaching and lecturing. He remained as curious about the medium as anyone I know and it served him well.

The last time we photographed together was a few months before he entered the hospital. He was still getting around but he was clearly fatigued and couldn’t walk very far. I was in Rhode Island for part of the summer and Keith often would drive up to Narragansett and we’d photograph together around Southern R.I. I limited our photographing that day to a more car centric day that did not require too much walking. We’d stop at one location or another, often on a hunch, our motto was always “no veto” if one of us wanted to stop, there was no veto, the other had to go along with it. You often ended up in places you never considered stopping at.  Still Keith would make it out of the car and would scan the landscape and you could see he was still trying to figure it all out, to make sense of the world around him as a photograph. In the end Keith never stopped being an artist. 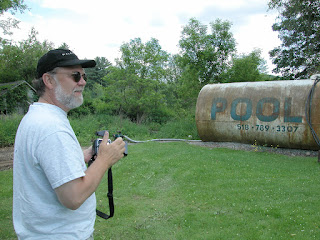 The saga of my printer or my Epson Rant

I purchased my P-5000 printer October 31, 2017 (perhaps Holloween was a sign for trouble) and for almost 3 year it was surprisingly well behaved. Compared to my last Epson a 4900, it was reasonably clog free or at least, it cleared the clogs without too much work even though the printer often had a month or longer down time when I traveled to R.I. in the summer. Still I ran tests thru it almost daily and printed when I could. 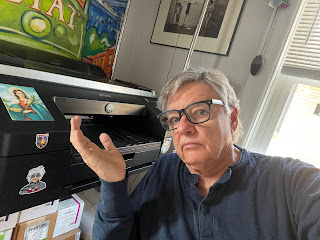 Even St. Lucy could not protect me from the Epson Curse

About 6 months ago the printer during cleaning cycles would throw an error code 1433, which required a restart. After some inquiry it turned out to be a faulty print head positioning sensor and its a major repair, not as major as a new head but close to it. The problem was increasing as time passed and a few months ago I thought, well I'll just get another one, only to find they were on deep back order everywhere. It seemed that Epson was just not making them. This really complicated my situation, my studio is too small for a 24" printer, I print an equal amount of sheet and roll paper, I like the 17" format making 17x24 prints, and I has a complete set of replacement ink for it, valued at nearly $1,000. (its interesting that my ink inventory was like legacy lenses that keep you from switching from one camera system to another) This past week it just clogged, would not allow for a cleaning cycle to complete and the old error code 1433 kept forcing restarts. By chance I checked first B & H (backordered) and then did a google search and found one at Samy's Camera on the West coast, they said they just got a shipment. On a hunch I contacted Jim Doyle at Shades of Paper my usual go to guy and Jim very patiently talked me off the ledge, first we discussed the economics of repairing the failed sensor and then he tells me he had one and just one left after filling a bunch of backorders. I placed and order and its supposed to be freight shipped to me on Monday. 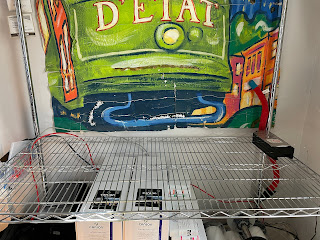 the former home of my old printer
So the moral of this story? First, my dear friend Aimee remarked that her refrigerator costs about what this printer does and if our refrigerators or washing machines only lasted as a long as what epson calls their "professional" printers, we would all riot. Three to five years it seems is all they last and for a $1350 printer (that is after the $400 rebate) this to me seems a scandal. We have al bought into this new way of thinking about technology/gear that it's only a short term relationship like computers and that just seems so wrong but its sadly the only game in town for those of us working digitally. I've spent a lot of my professional career digitally on the bleeding edge of technology, Olympus dye sub printer that fade after a year, early ink jet printers with 4 inks that had terrible color spaces and of course early on, really shitty paper choices. Compare that to buying a Beseler 45 enlarger and using it for literally a lifetime or a Hasselblad Superwide that could be rebuilt almost forever and suddenly the Nikon D100 6 mp camera that we purchased for almost a $1,000 seems crazy. We have hooked our wagon to this crazy deal and now all we can do is smile and make the most of the ride. 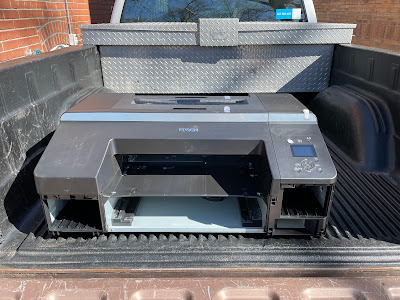 My old printer on its last ride to the electronic recycler.

Posted by Stan Strembicki at 8:58 AM No comments: 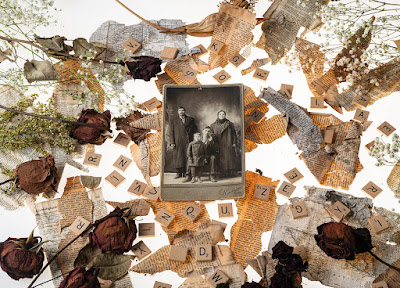 Posted by Stan Strembicki at 8:32 AM No comments: 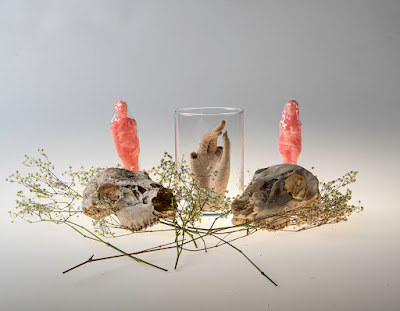 Posted by Stan Strembicki at 8:31 AM No comments: 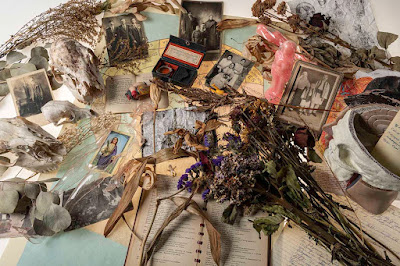 Posted by Stan Strembicki at 12:53 PM No comments:

This month I've been posting work from my 29 years of photographing Mardi gras in New Orleans starting in 1990 on my IG page. I have not missed a year (besides this year) but only once, in 2002 I went to Italy to photography carnavale or Mardi gras in Italy, photographing one weekend in Venice and the other in Viareggio. 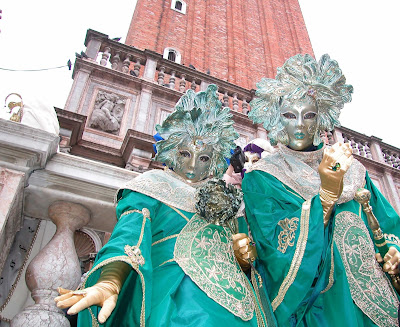 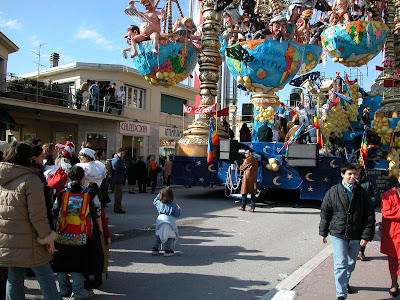 In general I found Viareggio much more authentic and far less touristed than Venice.
It was a trip that I bought my new Nikon P5000 digital camera with me. It was a blazing 5 mp and cost me close to $1,000- in $2002! It was wildly slow in terms of shutter lag (you push the button and wait 5 sec for the shutter to click) which put a damper on anything remotely spontaneous and not especially great AF and only shot jpgs. Ah the bleeding edge of technology. 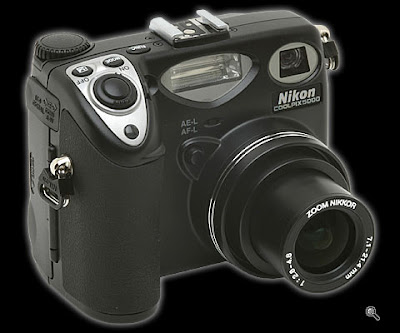 Posted by Stan Strembicki at 9:38 AM No comments: 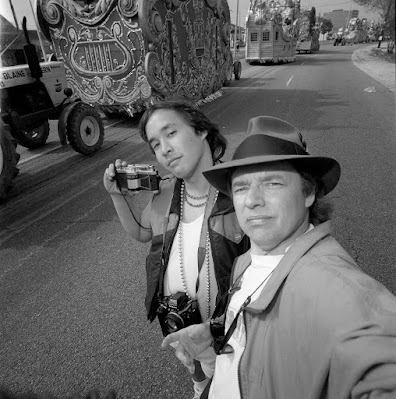 So this photo popped in my FB memories today, its from my first Mardi Gras in 1990. I am shown here with Eric Liu, a former student of mine. The story behind the photo was that in the spring of 1990 I had my first sabbatical while teaching at WU. Eric was a BFA photo major, a little older than most of the other majors and on the "five year plan" to put it politely. I had this plan to photograph in the south and southwest in a series of road trips. The woman who was taking over the photo program while I was on leave, Jan Ballard, had Eric in classes before, Jan was already a faculty in photo. Eric only needed his photo major credits to graduate and she remarked to me that she didn't think she could teach him anything so why don't you take him along with you. So I did, Eric's last semester at WU was basically being my assistant and side kick for a series of road trips photographing along the way, the most memorable being Mardi Gras. We loaded up my 1979 Datsun 280Z and hit the road, going to Mardi Gras, and later Santa Fe, N.M. for the national SPE conference. It was an educational experience for both of us.
Posted by Stan Strembicki at 6:22 AM No comments:

More sites and blogs about my work